Roger Christie, founder of the THC Ministry, and 13 church members were arrested by federal agents on July 8, 2010 and sent to Honolulu. All 13 people have been released on a personal recognizance bonds. Roger has been denied bail by the District Court and then again by an appeal to that ruling, despite a recommendation for a $50,000 bond by the federal Pre-Trial Services.

Roger is being represented by federal public defender Matthew Winter.

According to Roger’s friend and Ohio attorney, Don E. Wirtshafter, “Roger is a first time, non-violent drug offender.  This is not about Roger being  dangerous; this is a government tactic to shut Roger up.  This week Roger’s public defender filed a proper motion for the federal judge to overrule the magistrate’s decision to deny bail.”

“The government responded with a 46 page diatribe against Roger.  Read this for yourself to understand the viciousness of the prosecutors, the evil empire Mickey is continually describing for us.” 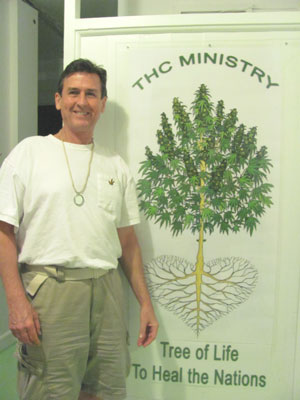 Please show us the blessings in this situation…

We are safe. We are loved, and all is well…”